Ouspensky came to England in 1921, determined to set up an organisation of his own. He had financial support from Lady Rothermere and friends and contacts in England, notably A. R. Orage, the editor of The New Age. After an initial uncertain period he attracted some good students. But in 1922 Gurdjieff, who had now moved to Germany, visited England, and Ouspensky and others attempted to start an Institute for him there. This did not work out; instead Ouspensky arranged financial support for Gurdjieff to acquire the Chateau du Prieuré des Basses Loges near Fontainbleau. In 1924 Ouspensky resumed his operation as before.

Madame Ouspensky meanwhile had stayed with Gurdjieff, though she left the Prieuré itself in about 1924 and apparently visited England regularly during the summer from 1925 on – the Ouspenskys rented a series of houses in the country, mostly within easy reach of London. Starting in 1928, they experimented on a small scale with having pupils come to work on the land attached to the houses.

Ouspensky was a frequent visitor to Paris, initially to the Prieuré, and later much of the work of translating his writings was done by his friends in Paris. In this period he was working on A New Model of the Universe and Fragments of an Unknown Teaching (In Search of the Miraculous – referred to as Fragments). 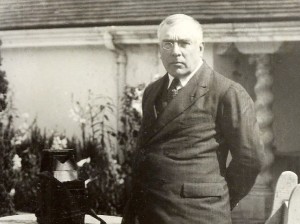 The next set of display panels focuses on some of the people and places associated with Ouspensky and, in particular, on his major financial supporters and the social milieu in which he moved.

The houses he had lived in with Madame Ouspensky were important to Ouspensky in relation to his ideas of recurrence, and shortly before his death he revisited all of them. Most of them have been traced.

At the start of his work in England it is likely that Ouspensky continued his teaching in much the same way as he had started in Constantinople, that is a combination of the System and his own ideas. He sometimes read from chapters of Fragments.

In 1925 he made a clear distinction between the System ideas and ideas which were generally available. He established an order in which the System ideas were to be taught (first: Law of Three, second: Ray of Creation, and so on). He seems to have maintained this approach throughout this period. There was little development of System ideas or his own ideas. It was a period of consolidation and learning how to run an organisation.